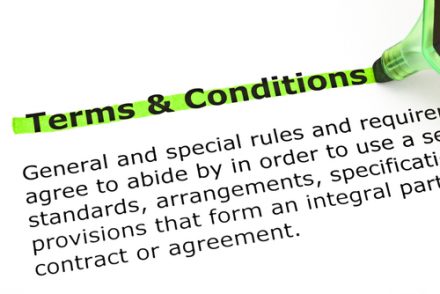 Whose terms of business apply? How to win the battle of the contracts.

12th October 2016 by Whose terms of business apply? How to win the battle of the contracts.

Allow me to describe a scenario that commercial lawyers see all too often.

A business has invested considerable time and money in preparing their standard terms of business. After numerous revisions, plenty of telephone conversations with their solicitors and the odd tantrum they are finally happy with their new contract and begin trading. The owners of this organisation manage to build a very successful enterprise. Its reputation grows, its revenue increases and a few years after incorporation the inevitable happens; the company enters into its first disagreement with a customer. The company is initially unconcerned, convinced that its terms are so beautifully drafted that they will knock their customer’s complaint out of the proverbial baseball park. Yet when formal proceedings start the contract turns out to be worthless. Why? It was not used correctly.

To be clear, an agreement is not binding simply because it has been written, or even mentioned. It must be communicated to and accepted by the other party to be enforceable. This may seem obvious to some, but a recent case has shown how easy it is to overlook these formalities.

Here two companies did business with one another on a weekly basis for over twenty years. When a dispute arose each side argued that their terms should be applied, quickly providing a copy of the same to the courts.

Under examination however it transpired that the buyer only sent their purchase order to the vendor, and had failed to include or even make reference to their terms of purchase (which should have appeared on the reverse of the order – an easy mistake to make when faxing or scanning a document). It was consequently held that, because the buyer did not follow a consistent practice of enclosing terms and conditions with every purchase order, the seller was entitled to assume that the buyer was not intending to rely on them.

What about the vendor? They had acknowledged each purchase order by stating that “The quoted prices and deliveries are subject to our normal Terms and Conditions of Sale (copies available on request.)”, but again they had not provided the purchaser with an actual copy of their terms. As a result neither party were able to rely on their terms and conditions. This meant that any transaction by them was governed by statutory contract law.

As with any legal tale, there are lessons to be learnt. You must provide the other side with a full copy of your terms at the very outset if you want to rely on them. Make sure you can evidence that you have done this. If the other party produces their own terms, come to a written agreement as to whose terms are to be applied. Don’t overlook these formalities even if you have a longstanding relationship with the other party. If you fail to do this you may find that contract is as useful as a waterproof teabag (or equally cheesy cliché) when the worst happens. Last but by no means least always seek legal advice if you are in any doubt as to how to make your contract enforceable.

For further information or advice, contact Sam Freeman on 01202 557256 or by email s.freeman@laceyssolicitors.co.uk

My word is my bond? Or is it? We take a look into contracts. Individuals being granted the right to compensation – are you ready for the latest changes in consumer law?
Close X