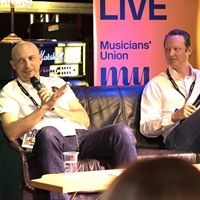 I had the privilege to be invited to speak at the CMI Music Conference held at Absolute Music, Bournemouth, alongside many other influential people from the music industry including the Musicians Union, PRS, PPL and Tunecore (the digital distributor).

Attendees represented many careers in music from photographers, managers, artists, creatives through to producers and unions.

There was various talks however, three main themes came out of the event that I wanted to comment on:

The recent agreement signed between Universal Music and Spotify allows a 2 week window for all their artists to be available on the Premium paid service only, not the free service, therefore increasing the revenue, but does this benefit artists overall?

“Do you want to release your music to increase fan base or to make money?”

Some new artists are keen just to be “heard” and the supposed 0.004 pence per play does not bother them. They are concentrating on building a fan base not making money.

More established artists have a fan base and are more concerned with making money. Artists such as Adele and Taylor Swift have made attempts to stop their albums going on the free Spotify service immediately. If you restrict the free access then potentially your super fans will buy the album physically or digitally, or pay the premium subscription to listen to the album. Therefore you make better money.

Then you have the exceptions to the rule; Ed Sheeran releases his album on the free Spotify service with 10.1 million plays for Shape of You in one day, obviously making him some money.

You also have Kayne West who signed an exclusive deal with Tidal to release his album (The Life of Pablo) and because it was not available for “free” it became the biggest illegally downloaded album of 2016.

So what is the answer…

Know what you want to accomplish with the release of your Single/EP/Album and use the right methods to achieve this!

TOP TIP: In all instances make sure you have a Distribution Agreement, so that it is clear which retailers will stock your music, when and at what cost.

PRS and PPL gave a talk about with the closure of so many live venues or their conversion to non-live music venues, how can artists practice their music?

At the conference it was generally agreed that new artists should attend open-mic events to practise their music and introduce (often a forgiving) audience to their own songs.

However, the next stage is always difficult going from a “practice session” to wanting to get paid gigs. In all circumstances artists should avoid the “pay to play” or “I won’t pay you but you can have a free drink” or the classic “…its good marketing and publicity for you”.

The only come and play for free for “good marketing and publicity” gig is if it is an established venue that guarantees the venue is full of major label A&R, managers publishers and producers, and this is rare.

Finding live venues is hard and getting paid sessions is even harder. It may be worth considering hiring a venue booker, who knows the venue owners and can get the artist on a particular night.

A lot of paying venues still ask for the artist to sell the gigs as much as possible as the payment could be linked with attendance and ticket sales.

It has been known for artists to sell tickets direct and any money made they keep. Which, if you are a new artist just starting, could be beneficial if you are good at marketing your fan base.

The other issue is getting your fans to pay to see you live. When most artists have videos or YouTube clips of them playing live, why should they pay to see you? As a new artist you need to convince them that your new song or set list or single/ album announcement is worth them paying to see you.

We also discussed who should be put on guest lists. Most artists have to pay for guest lists out of their own pockets so you need to think carefully about who you want to include. A&R contacts would be ideal, however do not put your fans on, as they will be willing to pay.

TOP TIP: All paid gigs should have a contract in place or at the very least an email chain specifying; what the fee is, who is paying for travel costs, when the artist needs to be at the gig, when the sound check is, when the artist gets paid, etc.

I gave a guest talk with the Musicians Union about music contracts and the need to do business in writing, and preferably in a contract.

On 31st March 2017, the MU joined forces with Music Managers Forum to create a new Music Management Contract template. Together the MU and I explained to the audience that you should never sign a contract without getting proper advice. The issue is that once you sign any contract it is very difficult to change your mind and get out of the contract. You must be sure that the deal is right for you. If you are unsure do not sign the contract.

TOP TIP: The MU as part of the membership can review a music agreements for an artist but they cannot draft one specifically for you, this is where you need a specialist music solicitor to make sure the contract terms are correct for you.

If you would like legal advice on a Distribution Agreement, Live Music Contract, Music Management Agreement or any contract in the music industry please contact me on Luke English on L.english@laceyssolicitors.co.uk or 01202 205022.

New Partner at Laceys Solicitors What’s in a name? Plenty of money if you are part of Brand Beckham!
Close X